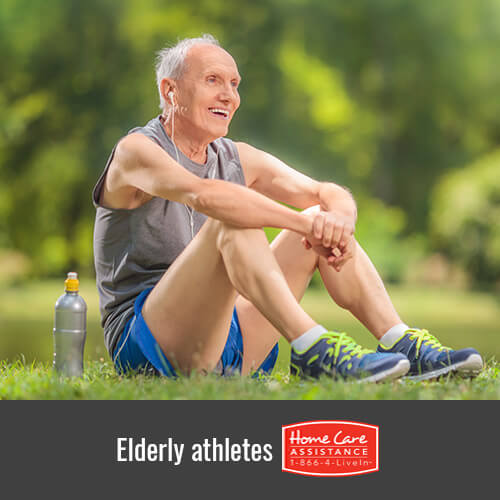 Aging doesn’t mean giving up on staying fit and participating in physical activity. Many seniors can continue to enjoy the athletic activities they’ve engaged in throughout their lives. The following list, brought to you by the Victoria senior care experts at Home Care Assistance, features 4 Canadian athletes 65 and over who are still full of life and are true inspirations.

Born in 1922 in Saint Lambert, QC, these identical twin skiers are sports legends who made up the entire women’s ski team at the 1948 Winter Olympics. After the Olympics, both sisters continued to ski in competitions and then became ski instructors for over 50 years. In 2015, they were inducted into Canada’s Sports Hall of Fame in the Legends Class. The Wurtele twins credit their good health to being active in sports and always keeping on the move. They golf and cross-country ski regularly and sometimes go downhill skiing at Mont Habitant.

McHugh is an awe-inspiring 88-year-old runner from North Vancouver, BC, who continues to set records. She began running marathons when she was 55 and has competed in over 20 marathons, including the Honolulu Marathon in 2015 where she broke the record in her age group for the best time. She credits running regularly and associating with young, active people for keeping her vibrant and young at heart.

Born in 1948, Orr is a former professional hockey player from Parry Sound, ON. Often referred to as one of the greatest hockey players of all time, he played 12 successful seasons with the National Hockey League. At the age of 31, he was inducted into the Hockey Hall of Fame. When he stopped playing hockey, he became a well-known scout for several professional teams. In 2013, his much-awaited autobiography Orr: My Story was released. Orr keeps active by coaching hockey teams.

Born in 1951 in Vancouver, Tanner is a former competitive swimmer who won 3 medals at the 1968 Summer Olympics. She now writes children’s books and has a website called Quest Beyond Gold. Tanner credits exercise as the reason she has remained physically and mentally healthy. She rarely swims these days, but she does go to the gym 2 to 3 times weekly to stay fit and takes every chance to keep active, from walking to taking the stairs.

The dedication these older athletes have to staying healthy can serve as a great inspiration to your senior loved one. If your loved one needs help maintaining a regular exercise routine, turn to Home Care Assistance. In addition to our respite and 24-hour care services, we also offer comprehensive Parkinson’s, Alzheimer’s, and dementia care Victoria, BC, seniors can count on. To learn more, call one of our friendly Care Managers at (250) 592-4881 today.