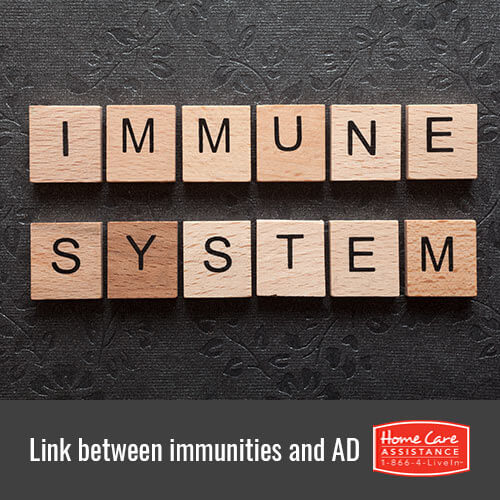 Though environmental factors, genetics, and lifestyle choices are believed to be the primary causes of Alzheimer’s, recent research indicates a compromised immune system may also play a significant role in the disease’s development. Victoria Alzheimer’s care experts discuss the connections between the immune system and Alzheimer’s and share details on some promising research for treatments.

A healthy immune system fights off everyday illnesses like influenza, but it also produces B-cells and T-cells, both of which are vital to a senior’s cognitive health. As we grow older, our bodies produce fewer of these cells, and the immune system has difficulty doing its job as a result. When fewer B-cells and T-Cells are produced, a type of protein known as an amyloid starts attacking brain cells and destroying synapses.

In addition to keeping the immune system healthy, researchers have also been looking for ways to specifically boost T-cell and B-cell production. One feasible way to do this is to inject stem cells so they can be converted into the necessary antibodies. The preliminary studies on mice are promising, but more research must be conducted before tests can be carried out on humans.

This is no permanent cure for Alzheimer’s, but an early diagnosis can make all the difference in a senior’s quality of life. Cholinesterase inhibitors have become popular in recent years as a way to slow cognitive decline and reduce other symptoms such as mood swings and confusion. When combined with cognitive behavioral therapy and assistance from a Victoria in-home caregiver, seniors can enjoy happy, healthy, and fulfilling lives for many years after their initial Alzheimer’s diagnosis.

Seniors who want to reduce their risk of Alzheimer’s or alleviate existing symptoms can turn to Home Care Assistance for help. Our proprietary Cognitive Therapeutics Method is designed to keep seniors mentally engaged in activities that help slow cognitive decline and delay the onset of dementia. For more information on senior care Victoria families can count on, call one of our qualified Care Managers at (250) 592-4881 to request a no-obligation consultation.