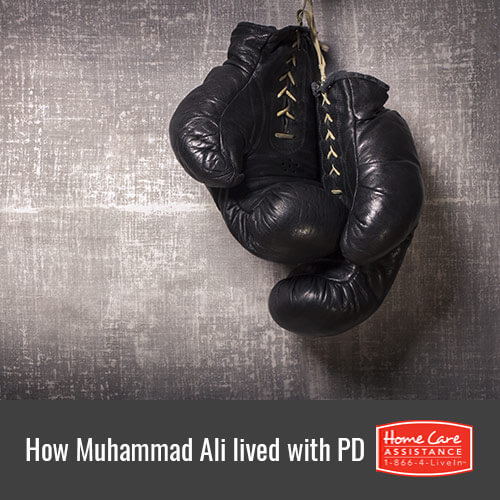 Muhammad Ali was a true legend as a boxer and as a warrior against Parkinson’s disease. He left behind many lessons to go along with his legacy, and Victoria, BC, senior care experts want to share a few of those important messages.

Even though Ali grew up poor and eventually developed Parkinson’s disease, he never gave up. Ali worked hard to build a successful boxing career, and he worked just as hard to fight against Parkinson’s after being diagnosed in 1984. Even when he was weak and could no longer speak, his emotional toughness allowed him to press forward. His inner strength has taught many people they can enhance their lives regardless of their circumstances.

Watch for Symptoms of the Disease

Ali, along with other celebrity spokespeople with Parkinson’s, inspired doctors to look for symptoms of this disease when people come in for checkups. As a result, many people are becoming more aware of the symptoms, while others are being diagnosed earlier and seeking treatment. Although there is no cure for Parkinson’s, treatment can help alleviate some of the symptoms associated with the disease. Ali taught the world that checking for symptoms is the first step in treating Parkinson’s.

Ali’s struggle with Parkinson’s inspired people to never give up fighting, regardless of who or what their opponents are. He not only had to fight against the disease itself, but he also had to battle the government to approve funding for Parkinson’s research. Ali’s wife Lonnie went before U.S. Congress in 2002, advocating on behalf of her husband. She described his fight with Parkinson’s and how he wanted to make the world aware the disease does not discriminate based on titles, achievements, or popularity. Moments like this were responsible for the funds given to treatment and research for the Parkinson’s community.

After being diagnosed with Parkinson’s, Ali fought back against the disease in any way he could. This included cofounding the Muhammad Ali Parkinson Center in Phoenix. Since opening in 1997, this center has been responsible for funding more than 40 projects that help treat Parkinson’s and work to find a cure. This is just one of the many ways Ali showed us we must be willing to do the things we ask of others.

Managing Parkinson’s disease can be challenging, even for the most determined seniors. If your elderly loved one needs help managing his or her symptoms, turn to Home Care Assistance. We offer comprehensive Parkinson’s home care Victoria seniors can rely on, and our caregivers are available around the clock to assist with tasks like exercise, cooking, bathing, and much more. For more information and to schedule a complimentary consultation, call (250) 592-4881 today.